Last week, the US government warned that hospitals across the US have been targeted by an aggressive ransomware campaign originating from North Korea since 2021.

Ransomware hacks, in which attackers encrypt computer networks and demand payment to make them functional again, have been a growing concern for both the private and public sector since the 90s. But they can be particularly devastating in the healthcare industry, where even minutes of down time can have deadly consequences, and have become ominously frequent.

Ransomware attacks on healthcare are particularly common in the US, with 41% of such attacks globally having been carried out against US-based firms in 2021.

“The current outlook is terrible,” said Israel Barak, CISO of Cybereason. “We are seeing the industry experience an extremely sharp increase in both the quantity and level of sophistication of these attacks.”

Ransomware hacks have caused major healthcare disruptions, including delayed chemotherapy treatments and ambulances being diverted from a San Diego emergency room after computer systems were frozen. In 2021, a lawsuit filed by the mother of a baby who died in Alabama alleged the first “death by ransomware”, blaming a 2019 hack of a hospital for fatal brain damage of the newborn after heart rate monitors failed.

The possibly devastating consequences for medical facilities may be one of the reasons hackers have identified them as a high-profile target. “The North Korean state-sponsored cyber actors likely assume healthcare organizations are willing to pay ransoms because these organizations provide services that are critical to human life and health,” said the advisory from the Cybersecurity and Infrastructure Security Agency (CISA).

CISA and others advise hospitals against paying ransoms, but providers often feel they have no choice, said Barak. In 2021, 61% of healthcare organizations that suffered a ransomware attack paid the ransom – the highest percentage of any industry sector.

“When lives are at stake, it makes the decision very easy,” Barak said. “These attackers have identified medical organizations as very, very good targets because they are more likely to pay.”

Attacks are typically carried out by private groups of criminals, experts say: in the third quarter of 2021, 30% of ransomware attacks on healthcare entities were carried out by Conti, a crime syndicate thought to be based in Russia, according to an industry report from cybersecurity firm BreachQuest.

But the North Korea incident revealed last week is just the latest state actor to orchestrate ransomware attacks on health care organizations after the FBI revealed in June it had thwarted an attack from Iran on a Boston Children’s hospital.

The healthcare industry has been hit by a perfect storm of factors that have escalated the ransomware problem, experts say: patient information is increasingly being digitized as hospitals struggle with small internet security budgets.

In 2009, the Obama administration passed a bill requiring all public and private healthcare providers to adopt electronic medical records by 2014, resulting in a massive migration of paper patient records to online systems. But today, just 4-7% of the average healthcare provider’s annual IT budget is focused on cybersecurity, the BreachQuest study said. 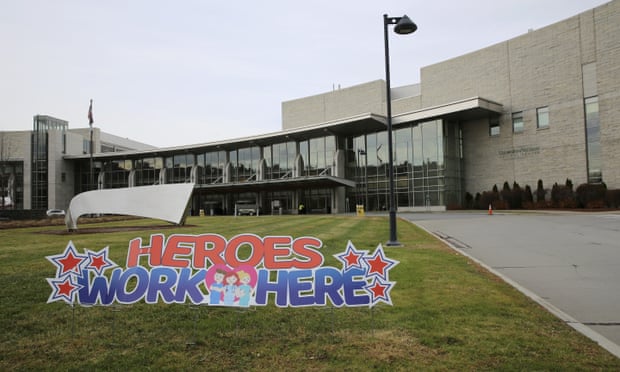 The University of Vermont medical center is among hospitals that have been affected by cyber-attacks. Photograph: Wilson Ring/AP

The move was accelerated by the pandemic, he added, as more providers shifted to telehealth to connect with patients during lockdown and hospital staff were stretched thin by the influx of sick and dying patients.

CISA has advised a “3-2-1 backup approach” for healthcare entities, including saving three copies of each type of data in two different formats, including one offline. But the agency’s advisory to hospitals is “somewhat unhelpful”, said Vincent Berk, chief security officer at the cybersecurity firm Quantum Xchange, offering generic recommendations about securing data with little clear path to doing so.

“The issue with this attack, and any other ransomware attack, is that the cure doesn’t really exist,” he said. “In other words, if it happens, it is already too late.”

Legislators are attempting to fill in those gaps. In May, Senator Patty Murray of Washington led a hearing on strengthening cybersecurity in the healthcare and education sectors, saying that the US “needs to address cybersecurity attacks and ensure they are treated like the national security threat they are”.

“These kinds of challenges don’t just cause major headaches, lawsuits, and expenses for hospitals,” she said. “They put patients in danger. They undermine our national security. And in some cases they even cost lives.”

In March 2022 the Senate introduced a bipartisan bill called the Healthcare Cybersecurity Act, which would direct CISA and the Department of Health and Human Services (HHS) to collaborate on a plan to bolster cybersecurity measures among healthcare and public health organizations.

Those measures would include cybersecurity training to employees of health organizations and authorize studies from CISA to identify risks in the industry. It is unclear when the bill is set for a vote, but experts say such legislation is more urgent than ever.

“There’s zero deterrence right now,” Barak said. “Until we find a more effective way to tackle this issue, I am afraid the outlook is not looking good.”