The threat actor behind the supply chain compromise of SolarWinds has continued to expand its malware arsenal with new tools and techniques that were deployed in attacks as early as 2019, once indicative of the elusive nature of the campaigns and the adversary’s ability to maintain persistent access for years.

According to cybersecurity firm CrowdStrike, which detailed the novel tactics adopted by the Nobelium hacking group last week, two sophisticated malware families were placed on victim systems — a Linux variant of GoldMax and a new implant dubbed TrailBlazer — long before the scale of the attacks came to light.

The malicious activities have since been attributed to a Russian state-sponsored actor called APT29 (also known as The Dukes and Cozy Bear), a cyber espionage operation associated with the country’s Foreign Intelligence Service that’s known to be active since at least 2008.

GoldMax (aka SUNSHUTTLE), which was discovered by Microsoft and FireEye (now Mandiant) in March 2021, is a Golang-based malware that acts as a command-and-control backdoor, establishing a secure connection with a remote server to execute arbitrary commands on the compromised machine.

Mandiant also pointed out that DarkHalo actors had used the malware in attacks going back to at least August 2020, or four months before SolarWinds discovered its Orion updates had been tampered with malware designed to drop post-compromise implants against thousands of its customers.

In September 2021, Kaspersky revealed details of a second variant of the GoldMax backdoor called Tomiris that was deployed against several government organizations in an unnamed CIS member state in December 2020 and January 2021.

The latest iteration is a previously undocumented but functionally identical Linux implementation of the second-stage malware that was installed in victim environments in mid-2019, predating all other identified samples built for the Windows platform to date. 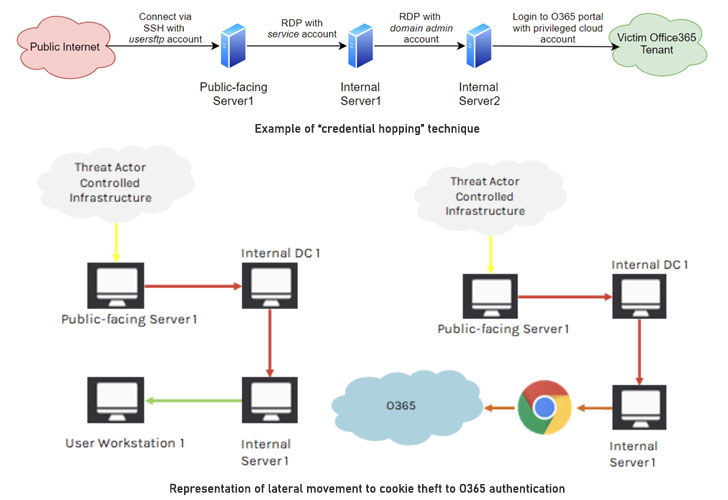 Also delivered around the same timeframe was TrailBlazer, a modular backdoor that offers attackers a path to cyber espionage, while sharing commonalities with GoldMax in the way it masquerades its command-and-control (C2) traffic as legitimate Google Notifications HTTP requests.

Additionally, the operators carried out multiple instances of domain credential theft months apart, each time leveraging a different technique, one among them being the use of Mimikatz password stealer in-memory, from an already compromised host to ensure access for extended periods of time.

“The StellarParticle campaign, associated with the Cozy Bear adversary group, demonstrates this threat actor’s extensive knowledge of Windows and Linux operating systems, Microsoft Azure, O365, and Active Directory, and their patience and covert skill set to stay undetected for months — and in some cases, years,” the researchers said.